Tug at the heart strings of mothers by reminding them that the little girl inside them is the best friend their kid(s) could ever have. And that BFFs want only the best for you: Goldfish crackers. 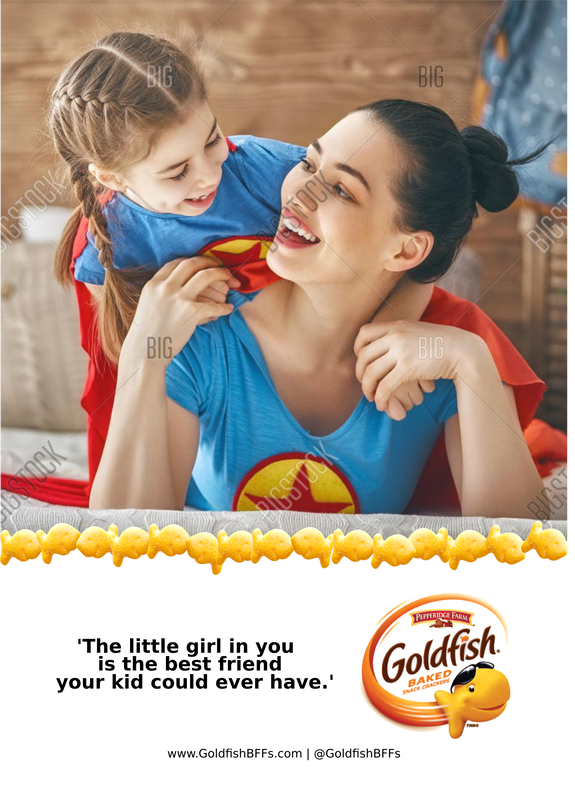 The headline, 'The little girl in you is the best friend your kid could ever have', will serve to reinforce the ‘BFFs’ campaign idea. Dedicated web & social media properties can further consolidate the approach by engaging buyers and users.

MUSIC THROUGHOUT: “Man! I Feel Like A Woman” by Shania Twain

OUTLINE: Spot opens on a 7- to 8-year-old girl in a supermarket aisle.

She’s happy, hopping and dancing while filling her child-friendly shopping cart with groceries, including several bags of Goldfish.

She’s next seen getting into an electric ride-on toy car and driving away.

The girl pulls into the driveway of a dollhouse.

She unlocks the front door.

A younger kid comes running towards her. They hug.

The kid pulls a bag of Goldfish out of one of the grocery bags and hides it behind his/her back.

With a huge grin on his/her face, the kid starts backing away from the girl.

The girl grabs the kid and they cuddle.

Camera closes up on the kid’s face.

Camera then pans around to show that the kid is in fact hugging a woman—the girl was actually the kid’s mother all this while.

SUPER + FEMALE VOICEOVER: ‘The little girl in you is the best friend your kid could ever have.’